"Stephen's job of work was excellent, as he discussed our requirements with us then carried out those requirements to the letter in a timely and most satisfactory manner. A trustworthy individual who is clean and tidy in his work, we would have no reservations in recommending Stephen and his workmanship to you."

Not a very difficult work here. Mrs. Woodcock simply wanted her office repainting with a very bold fuschia red stripe to match Mrs. Woodcock's fuchsia pink hair fringe. Hence it being just below the ceiling. The pictures of the astronaut were truly a blessing from God. Mr. and Mrs. Woodcock asked me to paint the spare room for their son Jonathan as a birthday present. As I know these 2 personally from church, I asked if I could use one of the walls to paint a mural also, as it is something I really enjoy doing. They gave me the green light and I asked God what I should paint because I had no idea what their son would like. Well, the Lord provided me with a tour of the universe on Google Images and we ended up at an astronaut. I created a collage of all the pictures the Lord had shown me and decided that was the way to go. Only after having made that choice did I speak to the Woodcock's to ask them what their son Jonathan would like. It was then that Mrs. Woodcock informed me that Jonathan had always wanted to be an astronaut when he was a boy but because of his eyesight, he couldn't. Then and there we were all blessed by the love of God for us. Jonathan loved the astronaut mural so much that he asked me to paint the "Great Wave of Kanagawa" in his living room too. 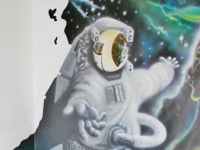 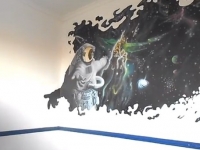 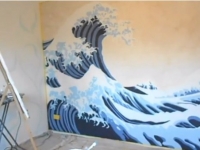 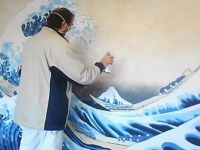 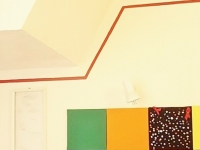 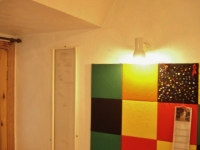 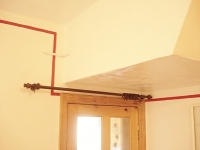 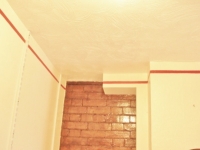